Readings can be found here. 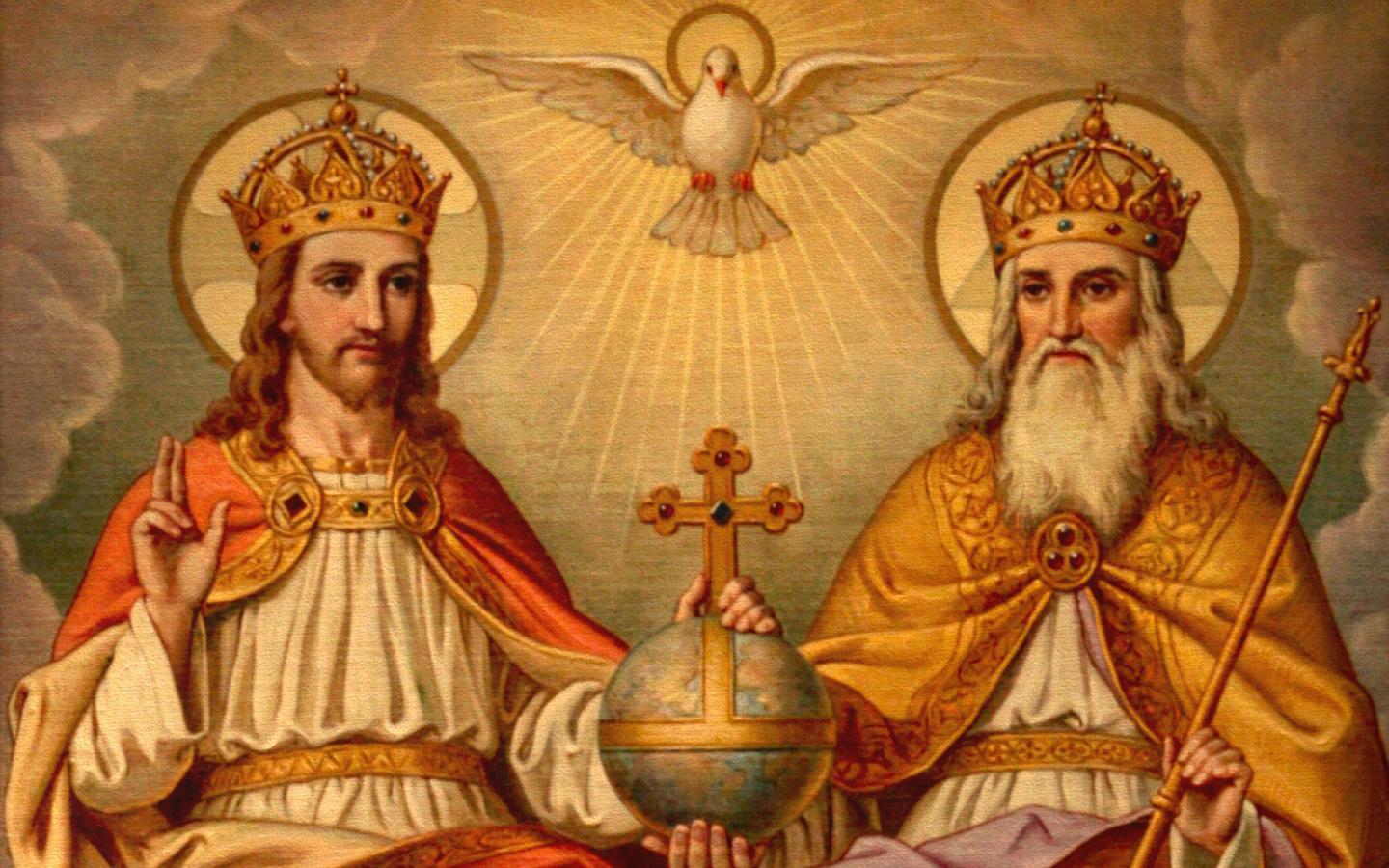 The Most Holy Trinity. If there’s one doctrine that’s common throughout all of (orthodox) Christendom, it’s this one….and probably the most mysterious for non-Christians, as well. There are so many analogies we can use to explain it: In my life, I’ve heard the egg, the atom/proton, the Earth herself in her layers, etc. But in my attempt to think about these analogies to explain “how”–how this is possible if we Christians claim to be monotheist–I’ve never thought of the answer for “why”: Why is this doctrine significant? The answer, I think, can be found in this week’s readings, which is that God, in the Most Holy Trinity, teaches us the importance of community.

The first reading is kind of confusing when it comes to Trinitarian doctrine. If I had to be extremely honest, I don’t remember this reading from the Bible…..like, at all. So, as if reading it for the first time, I was kind of confused: Maybe God IS a tad egotistical if the LORD is coming down on a cloud and praising Himself. However, as I thought about it, I remembered something that I had read that mentioned that Jesus praised God before creation happened. So I looked high and low for it, and I stumbled across St. Irenaeus’s Against Heresies. (In case you’re unfamiliar with him, St. Irenaeus lived in the 2nd century–making him a church father–and was instrumental in the development of Christian theology, especially as an apologist.) In it, he says:

In the beginning, therefore, did God form Adam, not as if He stood in need of man, but that He might have [some one] upon whom to confer His benefits. For not alone antecedently to Adam, but also before all creation, the Word glorified His Father, remaining in Him; and was Himself glorified by the Father, as He Himself did declare, “Father, glorify me with the glory which I had with You before the world was.” (John 17:5)

This, for me, answered two of my childhood questions:

In the One-in-Three mystery of the Trinity, God was never alone; He constantly lived in community with the other two Persons. So I think what I saw in the First Reading is a continuation of what God did before creation according to St. Irenaeus: The Word was glorifying the Father. But not only that: God created man not just because He was lonely, but so that He can confer His benefits–His company, His community–which is what He tried to welcome the people of Israel into when He gave them the Law…only for Moses to find that they had already moved on to make a golden calf their new bff. Obviously, we know Moses gets super peeved and chews them out by destroying the stone tablets, and then he goes back up the mountain to get another set of tablets.

Moses makes an interesting request during the second visit, which is where we pick up on in the First Reading: “…O Lord, do come along in our company. This is indeed a stiff-necked people; yet pardon our wickedness and sins, and receive us as your own.” A general misconception of the Old Testament is that God is a vengeful and wrathful being unlike His New Testament portrayal, but it is here that we dispel that. God (through what I think is the Word/God the Son) had just finished crying out how merciful He is; He was ready to forgive the Israelites and receive them back into His community.

From the First Reading, then, we learn how God, in the Trinity, treats His own community, both within the other Persons–glorification–and with man–forgiveness and gift-giving.

The Gospel Reading emphasizes further on how God treats His human community:

God so loved the world that he gave his only Son, so that everyone who believes in him might not perish but might have eternal life.

In the present form, it just looks like the quote that’s on bumper stickers across the country. However, the Greek does a better job explaining the theme of community because, here, St. John uses the phrase “πιστεύων εἰς” (pisteuon eis), which means “believing into.” This is interesting because, while this particular participle-preposition combo is used throughout John’s Gospel, in other places in the New Testament such as Romans and 1 Peter, the phrase changes to “πιστεύων ἐπ᾿” (pisteuon ep’/epi), which means “believing upon.” I think, already, we can just hear the difference in connotation, which is that the former, I think, sounds more communal than the latter. From this, I think that belief is much more than just a profession of faith that grants life everlasting; rather, it is being a literal part of God’s community. Of course, we call this community the Body of Christ.

Thus, the Gospel Reading teaches us that it is in God’s community–introduced to the Israelites in the First Reading and given to us out of love in the Gospel through the Word–that we find the same benefits that St. Irenaeus spoke of.

However, being a part of God’s Triune community is only one part of the puzzle. We live on the same Earth as one another, so we must put up with each other. Thus, the other piece of the puzzle is how to put up with each other? God created man in His image and likeness (imago Dei), which is literally that of a community of love. Thus, His forgiveness on Mt. Sinai and His gift of Christ to us are examples of how we ought to treat one another. St. Paul, in the Second Reading, explains further:

By virtue of being made in God’s image, we should expect to treat one another like God treats His community. After all, we make up the Body of Christ. While it may be difficult at times, it is through Christ’s grace, the Father’s love, and the Holy Spirit’s communion that we are able to do this. So membership in the community of God isn’t just imperative for eternal life, but it’s essential in order to recognize both each other’s grace-filled membership in the same Body and to love one another as part of the same Spirit of fellowship.

Today, I heard in Father’s homily that, while we may attempt to explain the “how” of the Trinity, it is mysterious to us (mysterium est); we can’t possibly expect to completely understand it. What we can and ought to understand, however, is the example it provides for us and also to recognize its significance in our lives.

Therefore, let us be truly little images of God; let us allow ourselves to embrace the love of the Father; let us be filled with the grace of Christ so as to share in His glory and “believe into” Him and His community; and let us be filled with the Spirit to embrace ourselves in each other’s love and shower each other with encouragement. If we do this, then I think we would take huge strides towards a more peaceful world, a world more like God’s Kingdom.

May St. Paul’s conclusion to his second letter to the Corinthians take a whole new meaning for us as we engage God and one another this week:

The grace of the Lord Jesus Christ
and the love of God
and the fellowship of the Holy Spirit be with all of you.